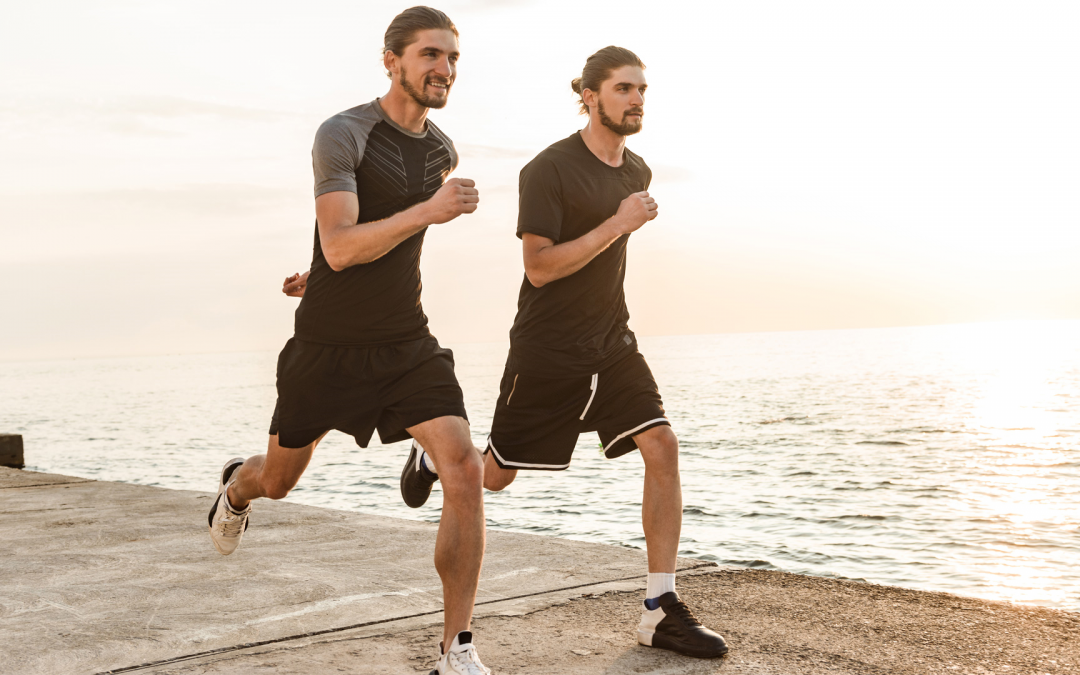 On the 15th of May, the Expert Group on Inositols in Basic and Clinical Research (EGOI), organized a webinar to share the new evidence of inositol to manage PCOS and infertility. A very informative webinar involved over 70 countries all over the world.

Back to basics: what inositol is

Inositol is a prebiotic molecule with a long history.
In fact, it was formed on the Earth before the appearance of the first living beings (prebiotic era).
When we talk about “Inositol” we refer to a group of nine cyclic polyols stereoisomers, among which there are Myo-Inositol (MI) and D-Chiro Inositol (DCI), both essentials for cell structure and functions.

MI is the most abundant in animals and is actively synthesized in many organs, such as kidneys, testes, liver, mammary gland, brain. In turn, DCI can only be obtained from MI by a specific and unidirectional epimerase, stimulated by insulin. The production of both molecules depending on the specific tissue need: for example, while the plasma ratio in healthy women is 40:1, this ratio is close to 100:1 in the ovarian follicular fluid.

Myo and DCI can be considered two twin brothers that, although at first glance identical, do different jobs: for this reason both essential but depending on the service you need. MI and DCI are both deeply involved in insulin signaling. In fact, Insulin needs the presence of MI and DCI to exert its activities. MI inositol controls the cellular glucose uptake; in keeping with this physiological role, MI levels are very high in tissues continuously utilizing large quantities of glucose, such as the brain, the heart and the ovary. Instead, DCI is responsible for glucose storage (glycogen synthesis) and, in keeping with this physiological role, DCI is significantly present in tissues that store glycogen (e.g. liver and muscle) and low in those where glucose is actively used. For this reason, in a complex condition such as the PCOS, their synergic activities, if combined in the right ratio, allow reaching better results. 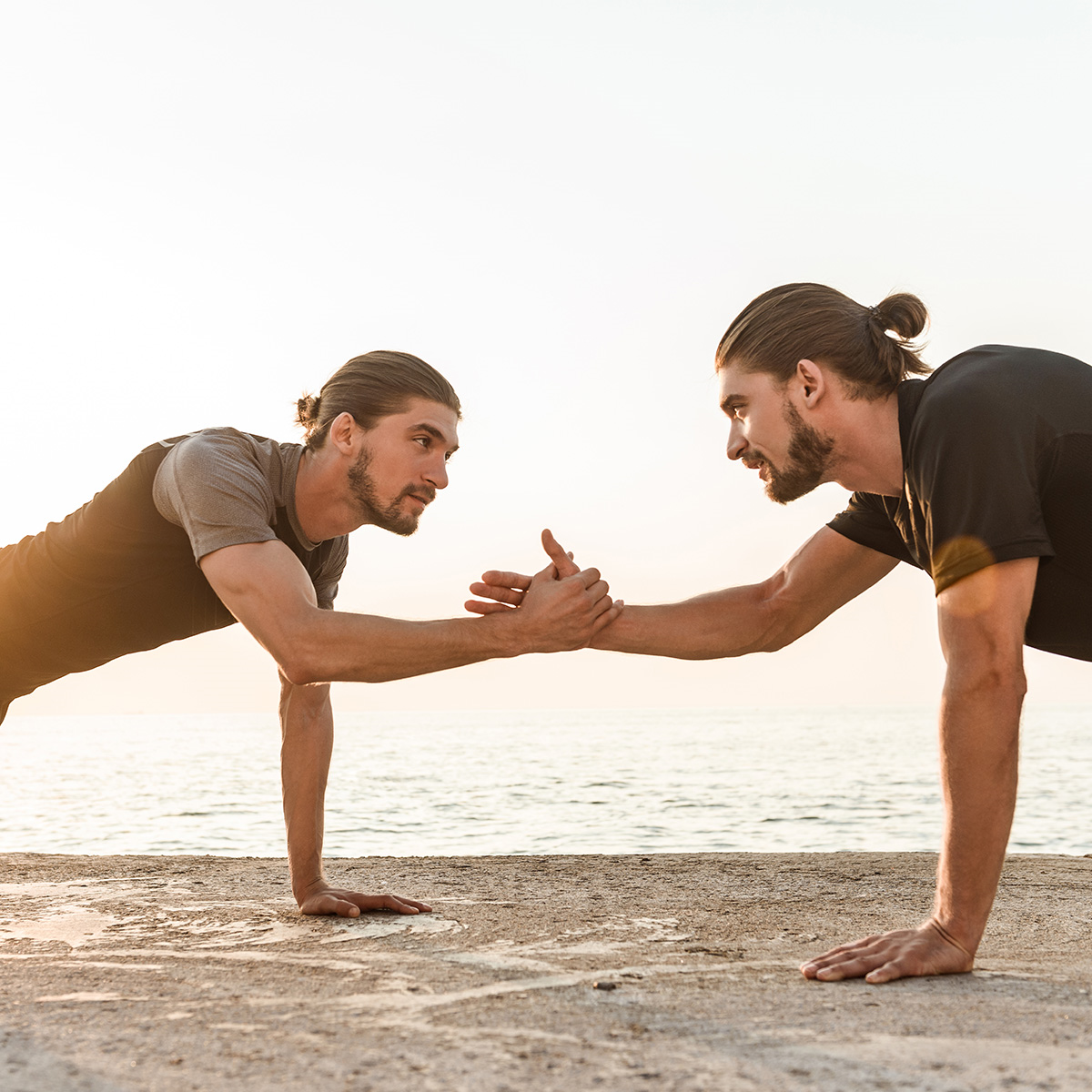 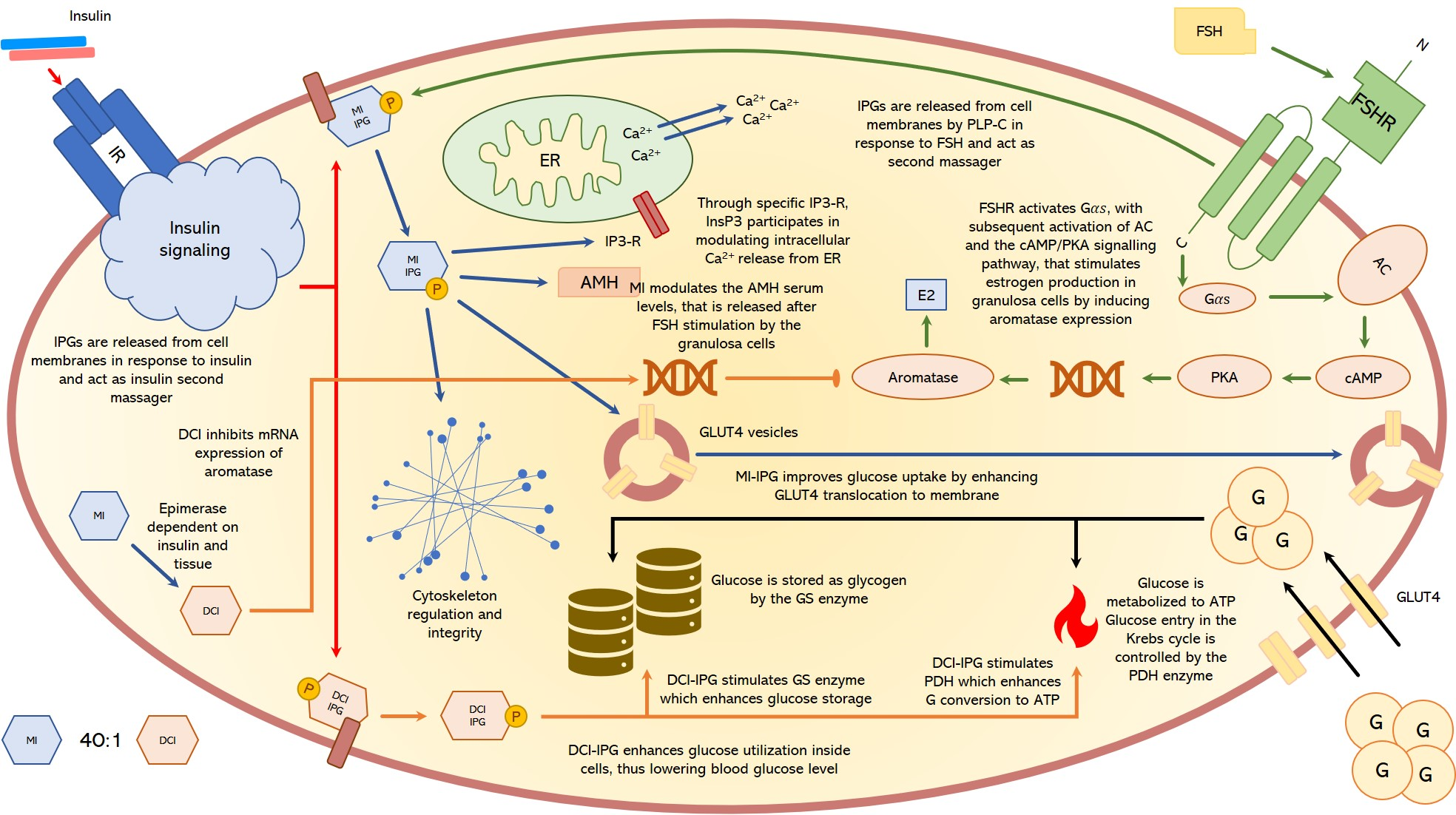 As previously said, MI/DCI ratio varies depending on the specific tissue needs and at ovarian level this ratio is close to 100:1. Curiously, this ratio drops from 100:1 in healthy women to 0.2:1 in PCOS patients. In fact, one of the main features at ovarian level in PCOS patients is the MI depletion and the DCI overload. In this sense, a very interesting theory bases on the so-called “ovarian paradox”. This theory bases on the fact that since the ovaries, contrary to other organs (e.g. liver and muscle), never become insulin resistant, and considering that MI to DCI conversion is stimulated by insulin, a hyperinsulinism condition in PCOS patients triggers a continuous MI to DCI epimerization into the ovary, resulting in increased DCI and decreased MI levels. So, considering that MI is one of the second messengers of follicle-stimulating hormone (FSH), this impairment compromises the FSH signaling thus affecting the oocytes quality. For this reason restoring and maintaining the MI:DCI physiological ratio at follicular level is mandatory to ensure an optimal ovarian functionality.

Preclinical studies on PCOS animal models before and clinical studies on PCOS women later, were recently carried out in order to provide evidence that the efficacy of MI/DCI varies by varying their ratio, thus demonstrating that even the “twin brothers” do different jobs, they are metabolically linked.
It is necessary to mention that there is a so common condition underlying PCOS: the insulin-resistance.

Most PCOS patients, in fact, have impaired glucose metabolism or even insulin-resistance, a condition worsening with the BMI. This means that in these subsets of patients it is extremely important to first restore this impairment as soon as possible. All preclinical and clinical studies showed that 40:1 ratio allows a faster and complete improvement of PCOS signs and symptoms, while the other MI:DCI ratios (i.e. 1:3.5; 2.5:1, 5:1; 20:1; 80:1) not also showed to don’t’ be as effective as the 40:1, but most of the exerted negative effects. In fact, by passing on the opposite side of the balance, trials showed that formulas with high DCI content seem to even worsen pathological features of PCOS.

The efficacy of the optimal 40:1 ratio was also confirmed in overweight and obese PCOS patients. When compared to diet only or MI therapy alone, the 40:1 ratio seems to accelerate the diminution of weight and fat mass with a slight increase of lean mass. But interestingly, it was observed that the 40:1 supplementation ensured a 100% restoration of menstrual regularity, while this result was only 57.2% in diet group and 80% in the MI group, after 6 months of treatment.

Inositol: as a new safe Metformin?

One of the most challenging features of PCOS is the glucose impairment. As known, today metformin is probably the used oral insulin sensitizing agents, born and used firstly for the management of diabetes but known also among the clinical community working on PCOS management. Although effective in most cases, it is not free of side effects.
The strong scientific evidence supports the pivotal insulin sensitizing effect of both MI and DCI in PCOS patients, that means a reduction of the insulin resistance (i.e. HOMA-IR index).
A very recent clinical trial carried out by Thalamati S., compared the effects of Metformin and MI:DCI in 200 PCOS patients who were randomly divided into two treated groups, the first one receiving Metformin and the second one receiving MI+DCI combination in a 40:1 ratio. The results showed a significant improvement in both groups, but the 40:1 group had statistically significant improvement over the Metformin group, with interesting results in controlling the hormonal profile, such us the LH/FSH ratio and free testosterone.

It is fascinating how inositols have improved the clinical management of PCOS. The knowledge of inositols is growing during the years and this is only a part of the clinical potentiality of these molecules.

To deepen the knowledge on the role of inositol in PCOS, you can watch the full webinar at the following link: “Inositols in Polycystic Ovary Syndrome. An overview of the advances”